Age of Conan versus LoTRO as an Homage

There are a lot of areas of Lord of the Rings Online that really perfectly evoke the feel of the books. If you are remotely familiar with the books, this scene of the Shire at night will look familar: 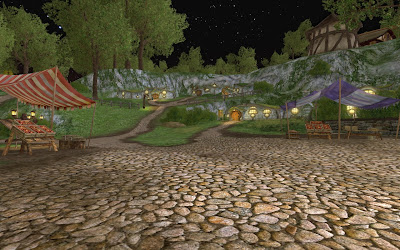 And of course this image of three stone trolls you will recognize if you have read the Hobbit or the Lord of the Rings recently: 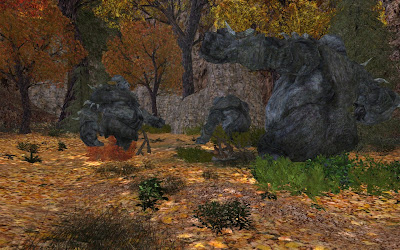 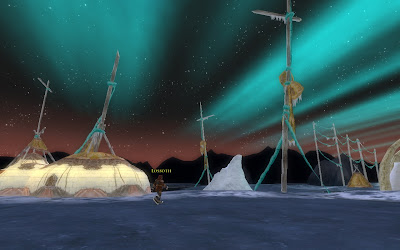 There are certainly some elements that stick out like a sore thumb. My hobbit on a goat seems more than a bit out of place: 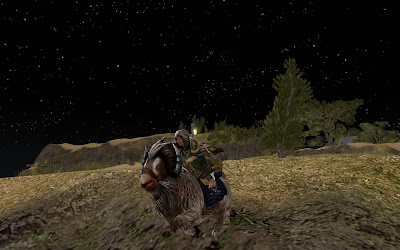 And this scene of my Runekeeper smiting the hell out of a Dour hand nearly breaks the lore over it's knee: 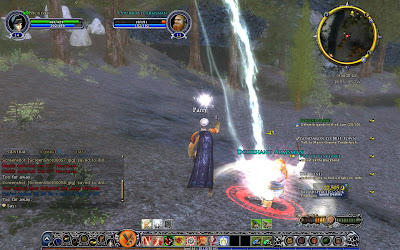 However, all in all, most of what you will find in LoTRO seems like a perfectly valid extrapolation from the books. Very few of the details of a given zone occur anywhere in the books, but they generally feel as if they could have if Tolkien was given time to write more. While still remaining a compelling game, I think that LoTRO does about as good a job with the source material as you could expect.

At first glance, Age of Conan doesn't evoke it's source material as strongly as LoTRO. I have yet to visit a location I recognize from the Howard stories. For example, I sure as heck don't remember this place (as pretty as it is): 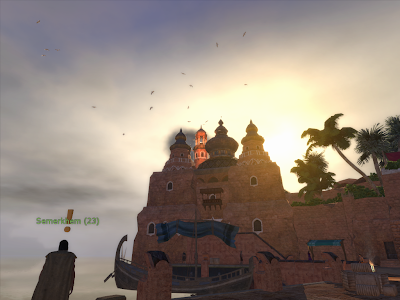 However, I think that's an unfair comparison for several reasons, not the least of which is the difference in the writing style of Tolkien and Howard. It's easy to figure out what to make a lot of the settings in LoTRO look like because Tolkien describes them in such detail that you'd think he was working from a set of blueprints or terrain maps. Howard, on the other hand, rarely has much patience for describing nitpicky details of his settings. The places he describes are meant largely to evoke a mood and provide a set piece for some action. 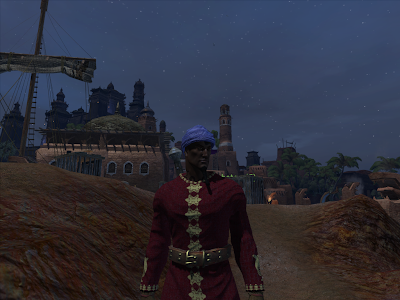 So what are we left with? Does AoC evoke the mood of the Howard stories effectively? Yes, largely I'd say. The combat is fast paced, and some of the crit animations are quite gory. This is in good keeping with the source material; Conan tends to send limbs, heads, and intestines flying around all over the place wherever he goes. If anything the game is tame compared to the books. And Howard spends as much time describing the action as anything else.

Further, even though we might not recognize many (or any) of the locations, they all look like they could have come from one of Howard's stories. This early view of Tortage certainly looks like it could have been from one of his stories to me: 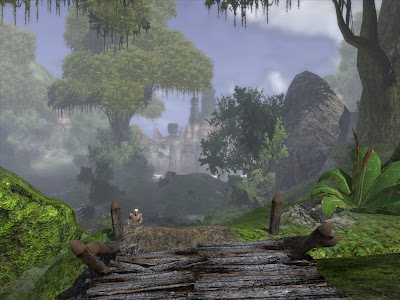 The the game elements I've encountered so far are also mostly logical seeming extrapolations from the Howard short stories. Sure, there are a few glaring exceptions. Some of the casting classes feel almost as out of place in AoC as they do in LoTRO. For example, while there are certainly beings with amazing magical abilities in the Conan stories, you just don't see large numbers of (or any that I recall) fire spouting were-demons wielding giant two handed swords. Here's my Herald of Xotli "hulking out:" 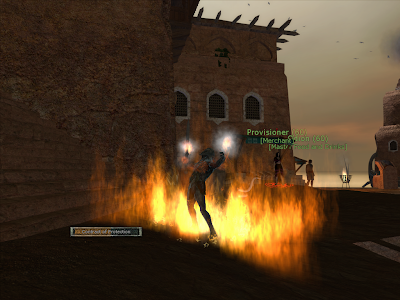 While I can imagine that such beings existed in Howard's world, it's odd to see them as common as merchants and beggars.

Despite this and other quibbles, the Hyborian Age is overall a lot less restrained setting than Middle Earth and the developers can get away with more. And, to reiterate, all of the locations I've explored so far seem as if they would be right at home in one of Howard's short stories. All in all, I'd say it's an MMO literary homage right up there with LoTRO. It remains to be seen whether rumored MMOs based on harry Potter and other literary IPs can meet the bar that has been set by the first two big ones.
Posted by Yeebo at 9:46 PM

Labels: Age of Conan, Lord of the Rings Online