Developer Appreciation Week: props to Turbine, as well as some honorable mentions

The studio that gave me the most entertainment over the the last year was definitely Turbine. I discovered DDO during the spring, and had one hell of a time there. The real time combat, abundant traps and puzzles, and stupidly deep character development system make it a serious breath of fresh air compared to most fantasy MMOs. They have been updating it like crazy, with significant new content being added every two or three months. The solo game may effectively end in the mid levels for many classes, but you will have an incredibly unique experience getting there.

I also have to give props for Turbine for having the guts to switch their most successful sub based MMO over to FtP. Where DDO was on life support and had little to lose from the conversion, LoTRO reportedly was north of 200K steady subs. Potentially setting an audience that big on fire was a risky move, but it really seemed to pay off for them.

Finally, Turbine gets huge credit with me for not being afraid to make major updates to core systems that were unpopular with the players. Yesterday's patch removed radiance from the game and included a major revamp of the legendary item system. Both changes were also preceded by "me culpa" dev diaries that I found incredibly refreshing. If only all studios were as responsive and transparent. Under this year's DAW theme, communication, I think Turbine has really taken the cake this year.

In the gonads of stone department, I also have to give honorable mention to Blizzard. Love or hate Cataclysm, a major redesign of the core leveling game was a gutsy move. Just based on social inertia they could have coasted on their old leveling game and still likely had the most profitable MMO on earth for years. But they thought they could make it better, and in this blogger's humble opinion... they did.

Finally, I also want to give a shout out to SOE and EQ2X for value. The silver membership in EQ2X is pretty much the best bargain in modern MMO gaming. You get access to something like 3/4 of the entire game for absolutely free, and for a mere ten dollars you unlock enough features to make for a highly playable experience. You end up with 6+ months of top shelf full featured MMO gameplay for less than it costs to sub to most MMOs for a month. I have whinged about aspects of their payment plan in the past, but the silver member ship on it's own is an absolutely fantastic deal. My fun-to-cost ratio in EQ2X was off the charts.

Finally, thanks to Blue Kae for reminding me about DAW and Scary Booster for organizing it.
Posted by Yeebo at 3:37 PM 7 comments:

I sort of side stepped Rift for several reasons. First off I didn't feel the need to get going in another fantasy MMO. I have toons up and running in WoW, EQ II, LoTRO, DDO, and Wizard 101 after all. As long as I keep paying my WoW sub I can visit them whenever I want, since most of those games are FtP. I was also utterly and thoroughly addicted to WoW during the beta events. I hadn't played the WoW much since the LoTRO open beta (three years ago?), and I decided to start over from scratch when Cataclysm launched. I was smack dab in the middle of Cataclysm during the beta events, and that's some of the best content in modern WoW. Finally, due to my newfound enjoyment of PvP, the endgame of WoW hasn't immediately face planted for me like it usually does. Both when the cap was 60 and when it was 70, WoW ceased being remotely fun within a week or two of hitting the cap. This time, ranked battlegrounds are actually keeping me entertained.

Still, Rift launched almost three weeks ago, and the buzz around it is still overwhelmingly positive. I have to admit I'm starting to get curious. If the most widely followed MMO blogger is defensive because he's not playing it, and another that spends most of his time trolling the internet is gushing about it, Rift must have something going for it. At the very least it's sending out big ripples in the MMO blogosphere.

On top of that, I have seen my future in WoW. It's me running out of goals I can reach with any sort of reasonable time investment in about a month. I will have my super big glowey dragon mount in about another week if I keep going at my current pace. I could also get a glowey ghost horse that says "I've spent way too much time grinding in Tol Barad" to show off in battlegrounds a week or two after that. I'm also starting to run out of PvP gear to buy. I have a nice cloak coming tonight (win or lose I'm one battleground away from it), and a ring I will likely get early next week. After that there's no gear left I'm particularly excited about. A necklace and a trinket or two are all I'll have left to earn. That's not more than three more weeks of PvP.

There is another set of gear you can get with conquest points, but you only get 25 of them a night doing ranked battlegrounds. Even getting up the 2000+ I'd need for my staff would be a fool's errand at that rate. You can get them faster from the Arena, however I don't have much interest in Arena matches. They are pretty much straight up fights with little strategy to them apart from knowing the ins and outs of every class intimately. By itself no small thing, I will allow, but not an amount of study I'm willing to put in for a game. It's only one step removed from dueling, a form of PvP I utterly despise. "Hey, let's fight solely to see who's e-peen is bigger!" No thanks . . .

And now I come to the point of this wandering post. One day soon, I may actually be getting on board the Rift train. It will depend on a few things. First off, is the game still going strong a few weeks from now? It's already pretty clear Rift is not an AoC/ WAR style disaster launch. However, it remains to be seen whether the servers will stay well populated in month two, when the really quick players start hitting the endgame and everyone has to pay a sub fee to keep playing. It also remains to be seen how well the rift mechanic will stand up to sparsely populated mid level zones.

Second, either the price for the client would have to come down (unlikely imo) or a demo would need to be released. My PC hits or slightly exceeds the recommended specs from their FAQ, but you never know. Sometimes a game hates something random about your rig, and sometimes even the recommended specs are really too low to run a game well. I'm not very keen on the idea of spending $50 on a client to find out whether it's playable and pretty on my PC.

Finally, will some new or old shiny distract me before I get around to Rift? LoTRO has a lot of new content coming at the end of the month, it may suck me back in. I may also have a further attack of insanity [PvP munchkin is far from my usual MMO playstyle, I'm still a bit shocked I'm digging BGs so much] and take up arenas or raiding in WoW. I've also been meaning to try World of Tanks again. Then there's Star Trek Online and Champions Online. I'm a bit curious to know whether they will still melt my rig now that I have a much bigger power supply.
Posted by Yeebo at 6:50 AM 9 comments:

Secret World: the floodgates are open

Via Massively, I learned yesterday that Funcom released a ton of new details about Secret World at the Game Developers Conference. They also now have a website for it with trailers, class info, and such. Secret World really piqued my interest when I first heard about it, but has somehow managed to fly completely under my radar recently.

I have to say what I am seeing there looks fantastic. The setting looks great, very different from all the elfy fantasy fare I feel that the market is currently glutted with. Sort of Left for Dead meets an a fantasy MMO set in modern times, with a dash of global shadow conspiracy thrown in for good measure. The character development system also looks interesting, it will be skill based rather than class based. I'm once again really looking forward to the game. I just hope, for their sake and mine, that the release doesn't jam up too closely to the release of SWToR.
Posted by Yeebo at 11:50 AM 3 comments:

Warcraft not winding down as quickly as I thought

I'm surprised to still be playing a lot of World of Warcraft, weeks after hitting the cap. What has sucked me back in is PvP battlegrounds, of all things. I tried PvP in WoW several times in the past, and quite frankly hated it. Trying to learn the ropes while also getting two shotted by players in gear that utterly outclasses yours is an exercise in frustration. However, the gear reset in Cataclysm seems to have alleviated this problem. Just hitting the cap, you are going to have 90K or more hit points, which means you don't go down nearly as quickly as you used to in PvP. Even on a very squishy mage, I'm consistently able to last long enough to at least be a distraction. I even hit the 1000 honorable kills achievement last night.

I'm working on the easy (from honor points) blue Bloodthirsty Gladiator's armor, which means I'll be losing a bit of crit (about a 2% loss to my chance overall if I've done the math right) to gain a ton of steady damage and much needed resilience. I'll be getting just enough of the core pieces for the 4 piece set bonus, because the hat I bought on the AH is actually decent for PvP (it has resilience on it), the Gladiator's hat would force me to give up yet more crit for no additional set bonus, and because it looks a bit dumb imo: 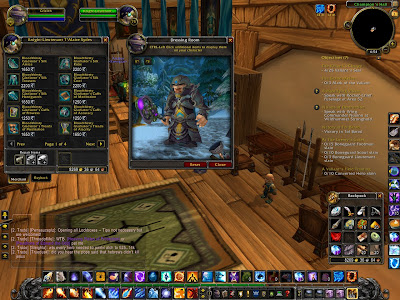 There are also better items to be gained from conquest points, including a staff that has me drooling. Unfortunately, at the rate I'm getting conquest points (25 a night) I won't even be able to buy the staff for ages. I'm almost up to enough points to get another staff from Tol Barod, and I'm planning to use that as a stop gap until I can get something better.

Finally, I started playing one of my alts, a Dwarf hunter, and I'm having a good bit of fun with him. Over the weekend I got him up to 60 and bought his first flying mount: 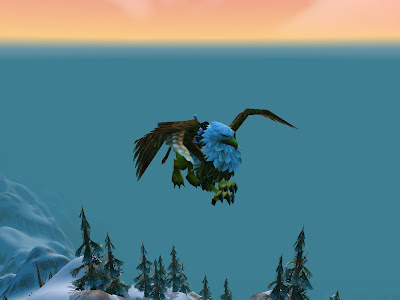 I went with the bald eagle looking one mainly because it's unpopular, but also so that I can cheaply get an armored one that looks the same at 70.
As a side effect of questing in the Outlands, I am now wearing horribly mismatched gear. I like getting nice looking armor sets together, but if I have to choose between looking like a hobo and gear with half the stats, I'll pick hobo every time: 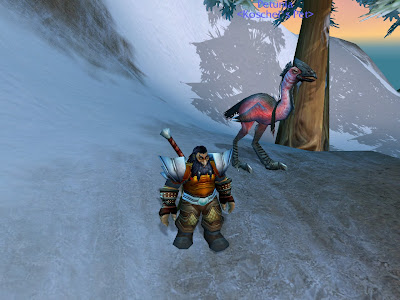 Hobos of WoW unite!
The bird pet he uses was a unique spawn in a horde starting zone when I first got her. It's now a easy pet to get, but I've been using her for years and I've gotten attached. Plus watching a giant pink bird kill the heck out of stuff never gets old.
Posted by Yeebo at 3:30 PM 3 comments: