Star Wars Galaxies: the Death of a Sandbox

Star Wars galaxies is one of those games I've read a ton about, but never really clicked with me. However, the news that SOE was shutting it down got me to sub up and see what the game is really like while I still could. I've been dutifully putting in at least a few hours a week, and I managed to get up to about level 40 on my main which is tons further than I’ve ever made it before. 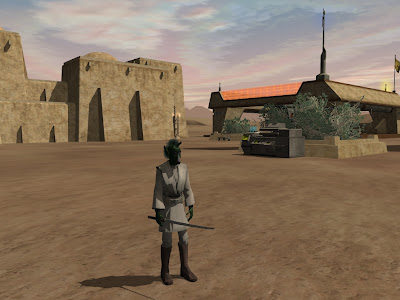 This is my non-main, a Rodian jedi I got up to 14 or so.
He didn't even have a light saber yet.
During my playtime I’ve come to regard the game as deeply flawed. For one, the graphics engine has aged poorly. I get really mediocre frame rates on a PC with specs much better than anything you could have put together when the game launched. Further, the single quest line that runs through the game becomes incredibly dull and repetitive by the time you get to Naboo. If you break a step in the quest (which I did once manage to do) pretty much the only remaining leveling activities are grinding random mobs or doing terminal missions. The combat is also generally really slow paced. It reminds me more of the original Everquest than anything else I’m familiar with. The fact that mobs can often shoot you through walls or tend start running around spastically in the middle of combat doesn’t help. Finally, even after 40 levels I still sometimes feel like I’m fighting with the controls. I certainly would not have played so much SWG in the past few weeks if they weren’t shuttering it tomorrow night. 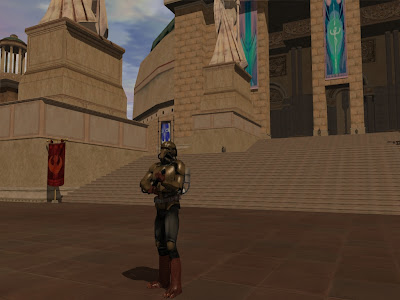 This is my main, a level 40 Trandoshan commando.
However, the other thing that’s really struck me about the game is how unique it is. Despite SOE’s best attempt to “WoWify” the game with the NGE, it remains very much a sandbox. A single poorly done quest chain (the Legacy quest series) can’t hide the fact that the planets are absolutely huge spaces almost entirely lacking directed content. They were designed for you to head off into the wilderness in a random direction and find your own fun, be it gathering resources or clearing out camps of mobs to level a combat class, and that’s still what they really work best for. Stumbling onto Jabba’s palace, the waterfalls outside the capital of Naboo, or something else you remember from the movies is a potential bonus. 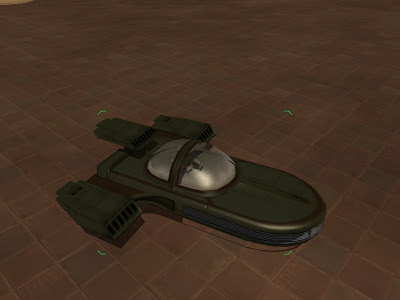 Even in my brief time playing my commando ended up with a heck of a lot of vehicles. Here is his land speeder. It is the starter ground vehicle, you get it from a quest nearly the moment you are out of the tutorial area.
Further, the fact that combat is now level based, and that you are locked into classes instead of the using the old mix-and-match skill based profession system, does not alter the presence of two non–combat classes: Entertainers and Traders. Entertainers are pretty much what they sound like, the easiest way to level one is to dance or play music in bars for tips. Traders are the crafting profession, and can choose to specialize in areas as diverse as the construction of robots to the construction of star ships and housing goods. On top of that, all classes (even the combat classes) can choose to forgo specializing in their class abilities and instead put points into a tree that allows them to raise various sorts of pets, from fluff to combat pets to mounts. 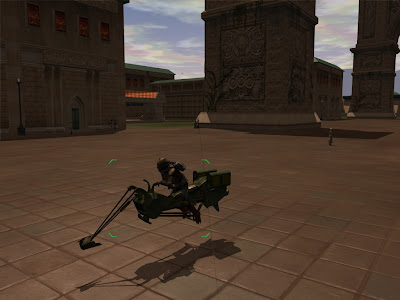 His speeder bike. You can only get this model from player crafters, and it's the fastest ground transport in the game.
There are a lot of other details that make the game feel like more of a sandbox than a theme-park. The economy is almost entirely driven by crafted goods. There are few avenues for getting good gear outside of the trading terminals. There are also tons of side games. There’s a factional conquest system where players determine whether the Empire or the Alliance controls different towns. You can get shot by NPCs if you find yourself on the wrong side of that system, which sometimes makes talking to quest givers in the middle of a town pretty interesting. There’s a Chronicles system that lets you design quests for other players. There’s also the fact that you can build your house pretty much anywhere. One of my cooler moments was stumbling on some guy’s house in the middle of nowhere and going from room to room admiring his trophies and vast weapon collections. 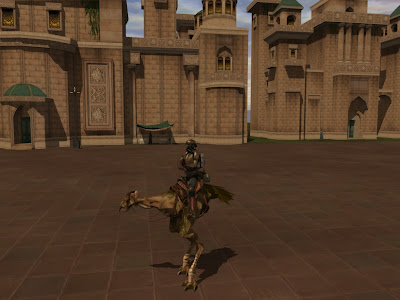 A random mount my commando got from a quest.
In my time in SWG I have managed to prove to myself that the game really isn’t for me. I generally lose focus and get bored after roughly an hour of play. However, I’ve also found that we are losing a really unique MMO that for the most part is not being replaced by SWTOR. Sure they are both MMOs with a Star Wars IP, but mechanically they are ages apart from each other. 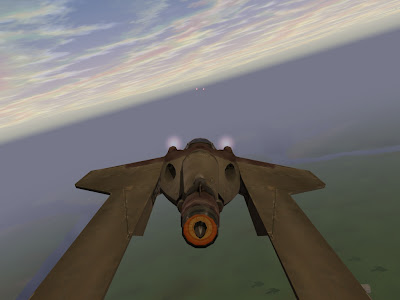 You get this spaceship from a quest in the tutorial area that's easy to miss.
SWTOR is perhaps the apex of theme-park design. Even Tobold, who has stated repeatedly that MMO players don’t give a rat’s behind about Bioware’s 4th pillar, has found the narratives compelling. In contrast, SWG is still for the most part a contentless sandbox with hidden depth in every direction (despite the NGE). In the current game you can board a starship and fly over miles of virtual landscapes; then point your nose at the sky, fly to the edge of the atmosphere, and zone into space where a whole new game that has nothing to do with the ground game opens up (piloting levels, ship upgrades, factional space warfare!). Even if the moment to moment gameplay is a bore to me, I have to admit I find that sense of freedom and limitless possibility compelling. 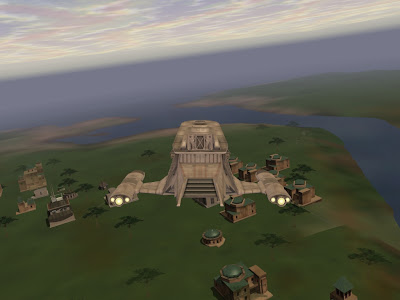 At some point in the last few weeks, I got his final vehicle as a loyalty reward...a freaking space yacht! Unfortunately this is the only view I ever got of it because I could not for the life of me figure out how to rotate my camera while flying a ship.
SWG wasn't made for me. I’m too addicted to narratives, and I find a lot of the basic mechanics to be dated and clunky. But for players that crave the kind of freedom and depth that is on offer in SWG, yeah sure I’ll shed a tear of sympathy. Have a virtual drink on me SWG fans. This week we mourn the loss one of one of the premier MMO sandboxes. 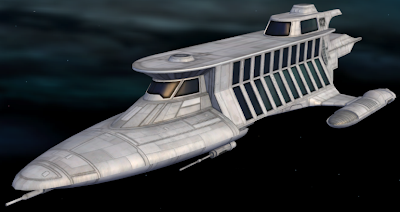 This it what the yacht really looks like. So long SWG. I will not mourn you, but I'll always wonder what you could have become if not for your untimely demise.

[I'm not going to spread this chain any further, but I thank Blue Kae for inspiring me to post this] .

It's been a while since I've written to you. I don't even visit you in the mall these days, I know I've been lax. I do sometimes donate a little bit of money when I see you out ringing a bell next to one of those Salvation Army buckets, so there's that. In any case I hope that I've been sufficiently well behaved that you aren't planning to come to my house and jam coal in my socks later this month. If you are planning to bring me something pleasant, I have a few requests:

1. For the love of all that is holy do not allow WoW style modding in SWTOR. When I play WoW, every time I see players having e-peen battles about their gearscores or DPS meter results, I want to stab them for boning my immersion. Please don't let SWTOR go there.

2. It would be pretty keen if you could get my early access to SWTOR bumped up by a day or two. I didn't pre-order until November, so there's something like a million pre-orders in line in front of me.

3. More reasoned critiques of MMOs on the interwebs, and less "this MMO is teh suxxors because it wasn't designed to cater to my peculiar whims." The comments on this post over at Ardwulf's layer speak to what I'm talking about, if that's a bit too vague.

4. Tolerance. More tolerance among gamers with different tastes. Remind every one that just because someone likes a game that one MMO gamer or group of gamers finds stale does not mean that the someone in question is new to MMOs, a drooling fanboy blinded by an IP, or mentally deficient. Different strokes for different folks and all that. More tolerance just generally (political, religious, ect.) would be nice while we are on the subject.

Any or all of that would be great. Also, please say hello to Mrs. Claus and Rudolf for me. They were kind of a big deal when I was six and I still think of them. Let me know what kind of cookies you prefer, and if skim milk is OK or if I need to go out and get something more substantial.