A neighborly suggestion for those using voice chat

[Warning, a bit of a rant. I spent last night experiencing one of my pet peeves in a party.]

I know that some of us live in less than ideal environments for gaming. You might not be able to help the fact that there are screaming kids, a really loud television, or perhaps constant machine gun fire and explosions where you are playing from. If you are in a party using voice chat, the background noise can be a little annoying and distracting to the rest of the party. However, I know that not everyone can afford living quarters with more that one room and/ or a secure bombproof bunker to game from. I'm not here to judge.

That said, if you are gaming from a room filled with screaming children, a desk near a blaring television [apparently being watched by someone legally deaf], a sidewalk near an active jackhammer, the middle of an ongoing gun-battle, the runway of a major airport, or an environment with similar constant levels of background noise....

Believe me sir, or madam, your party will thank you.

Austin: Things have been slow on the blog because I spent last week in Austin, Texas. It was my first time there, and I really enjoyed myself. Great food, great nightlife, but hot as the dickens. During the summer months something like a million bats hang out under a bridge near the hotel I was staying in. They all fly out in a giant cloud near dusk. It's an impressive sight (I didn't film that, but it was filmed from nearly the exact spot I watched them). Since I've been back, mainly I've been catching up on busywork in my job. However I have managed to get some gaming in.

SWG: since it's only going to be around for a few more months, I decided to stick my head into Star Wars Galaxies and give it one final try. Yeeboe the Rodian Jedi has been played the most. He also has the most pinp looking landspeeder of my 'toons so far: 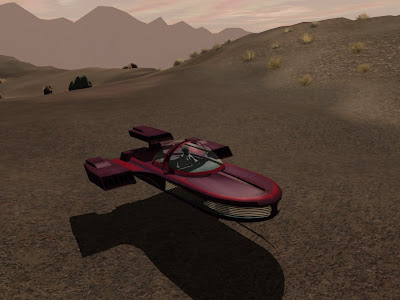 My only goal in this last run at SWG is to get a character, any character, off of Tatooine. I'm enjoying it a bit more this time around than my last attempt, I suspect largely because I was prepared ahead of time for the clunky UI. Following the game's single quest line I've made it to 20 so far. I did have one quest in my chain assign me to take down level 19-20 mobs when I was only level 13, but an evening of mission terminal runs (procedurally generated kill quests for very high XP) got me high enough to taken them down.

LoTRO: I've also been putting some time into Lord of the Rings Online. My two goals there are to max out weaponsmithing on a low level alt, and to get my champion through all of the book quests before Isenguard launches. 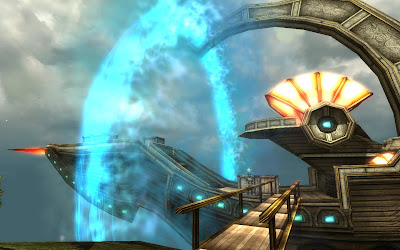 Even the lowest level guild airship comes with some nice perks. There is a shared storage chest that allows anyone in the guild to trade items. So far we are using it mainly to give crafting mats to the one character that's taken it up. There are also slots for NPCs that can be purchased with either platinum (in game currency) or Turbine points. An NPC lasts for about a week once you purchase them. Each NPC casts a unique buff for free on any guildy that talks to them. The buffs last an hour and stack with every magic item and spell buff in the game. The nicer NPCs are available for Turbine points at lower guild levels than it takes to buy them with platinum, however even our very low level guild is only paying TP for one of our three NPCs at this point. We are currently using NPCs that give a small buff to skills and offense, a buff to defense, and a buff to all incoming healing.

As the guild levels better airships will become available that let us slot more guild amenities, and NPCs with better buffs. All in all it's one of the more rewarding and interesting guild leveling systems I've seen.

Several Diablo III news items have been making the rounds today. The two big ones are that (1) DIII is launching with an online for real-life-cash auction house (Blizzard will take a small cut of all transactions) and (2) DIII will require a live internet connection to play, even solo.

I'm not sure how I feel about either. Certainly online enabled characters should be hosted on Blizzard's servers, not locally. Otherwise you get fiascoes like Phantasy Star Online back in the Dreamcast days, where everyone you met online was running around with ultra rare weapons that were best-in-slot. However, not providing some option for players to create locally hosted strictly-solo characters that are unable to interact with any of the online elements at all (multiplayer, the auction house, ect.) seems like a pretty baldfaced way of forcing players to come into contact with the new RMT auction house.

I expect both Blizzard and players with too much spare time are going to make a lot of money on this new system. I personally don't think legitimizing the sale of items for cash bodes well for the genre. This is very much going to be a pay-to-win system. Of course in any game as big as DIII is bound to be, there will be a market for items; if not legit then black. It will be a lot easier for Blizzard to control a legitimate market than one trying to stay off their radar. Everquest II has also been doing something similar for years with Station Exchange, and it has yet to trigger the apocalypse.

Another less commented on tidbit comes from Eurogamer, which has a glowing preview of the beta up. One item that really stuck out to me when I read it:

"Each character now has just six active skill slots (and three powerful passives, replacing the more complex traits from last year). Skills simply unlock as you level up, as do the slots - you start with two. Skill points and character respecs have followed attribute points into the bin, and skills can be swapped in and out of slots completely at will."

All I can say is "Thank goodness!" One of my major gripes with Diablo II was that it was far too easy to gimp yourself. You pretty much had to max out a skill to see whether it bit or not, and all too often the answer was "Yes, yes absolutely this skill sucks no mater how much you invest." Having skills do what they are supposed to from the get go and making them swappable on the fly sounds like a lot of fun. I also think it's interesting that Borderlands is mentioned in the article by one of the developers as an influence. Borderlands is probably my favorite Rogue-like of the modern generation.

I will almost certainly not be playing DIII on launch day. I'm not going to pay $60 for a game that jams RMT down my throat when there are similar, and less expensive, products that don't available. However, it does look like it's going to be a lot of fun, and I will likely get it whenever the price gets down to the $30-$40 range.
Posted by Yeebo at 1:06 PM 6 comments: