DDO: My Pack (a Preview of the Druid Class)

I don't often post here in character, but I'd though I'd try it as a way of spicing up my low level DDO Druid preview.  You too can have a wolf pack  by the ripe old age of level 2 in DDO if you own the Druid class.  Overall the class is a lot of fun, but I have to say it feels OP at low levels compared to "stock" classes.

This is my pack in the world of Eberron: 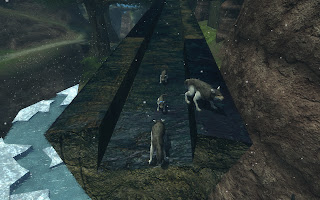 The ferocious bitch you see on the right I summon from the Wilderness beyond our plane.  Soldiers and thugs alike tend to underestimate her, until she draws close and they realize she outweighs them by 100 pounds of flesh and a magnitude of ferocity.  She hasn't told me her name yet, but a half dozen times she has died for my causes and more times than I can count she has answered my calls to the Material Plane.  She is always the first among us to snarlingly enjoin our foes, and because of that they often consider her the chief threat until it is too late.

[Game Notes: this is one of the two pets you can summon with Summon Nature's Ally I, which you get for free at level 1.  You can't control summoned pets directly in DDO, their AI is automatically set to aggressive.  The pet is quite powerful in low level content, but you want to replace it as soon as you can cast Summon Nature's Ally II] 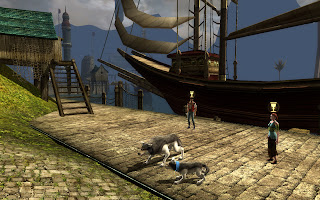 Here you can see me in my preferred material form, along with my most loyal friend.  I look similar to my more aggressive packmate, and so foes generally assume her to be our leader.  As impressive as my immortal summoned friend is, to the sorrow of our foes she has but a fraction of my power.  The spirits strengthen me.  I can heal wounds, strengthen allies, and even call fire if need be.  Such is the weave of my hide and the strength of my teeth that none have yet withstood me be they animal or man, shade or demon.


[Game Notes: a noticeable trend in DDO is that the classes you pay for seem to be getting more and more powerful as they introduce new ones.  Favored Souls are quite powerful, but mainly at higher levels. Monks can be extremely OP from start to finish, but only if you build them well.  Artificers with their strong pets and extreme ranged damage are OP compared to most stock classes unless you go out of your way to gimp one.  Now, Druids seem much the same to me with their powerful pets and shape shifting abilities, not to mention healing, nuking, and buffing as well or better than the other divine casters.]


Surprisingly, much of my power also comes from a sickle given to me by a barkeep in exchange for my services against the cultists of Korthos Island.  When I used the sickle in my natural shape I found it to be a clumsy weapon.  However, when I held onto it while shifting to my wolf form, its true power was revealed.  As long as I continue attack with tooth and claw, pausing only to find new foes when one ceases, it regenerates my skin and muscles.  Sword wounds close the instant they form, arrow shafts are spit on the ground like seeds.  Those that consider the fearsome bitch of our pack to be their primary foe soon learn otherwise.

[Game  Notes: when I finished my third Korthos Island intro quest, I took the scimitar that was obviously added to the rewards list for druids.  It gives you a 15 temporary hit points (a damage shield that works versus any attack to all intents) when you crit that regenerate every time you crit.  In wolf form, you will crit an awful lot I.  I don't think I used any of my "real" hitpoints more than two or three times in all of Korthos Island once I got it.] 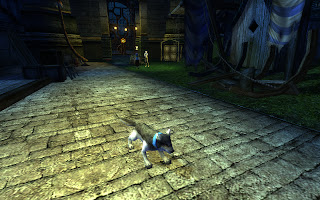 As for my most loyal friend with the stylish blue collar, Dusty, I found him in market in southern Khorvaire just before I set out for Xen'Drik and Stormeach. He's not much of a fighter, but I can at least take him into town without fearing that he will kill anyone.

This brings me to the last member of our pack.  The one that is most often underestimated, and the only one that truly frightens me: 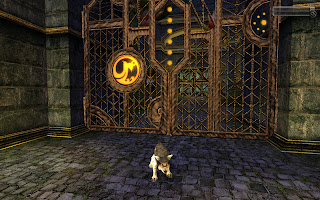 He looks a pup, much like Dusty. But Snowfang is no pup. He is my lifelong companion blessed by the same spirits that grant me my powers.  At present, with his awkward paws and tiny growl, most foes dismiss him.  When he hits their chest with the weight of a cannonball, knocking them down to break bones and sever arteries as his tiny mouth grabs and twists, few live long through their astonishment.  He is but a puppy yet.  What will he grow into?  How angry are the spirits I have chosen to worship?  More importantly, who are they angry with?

[Game Notes: so far this pet seems right on par with the Artificer pet, though not as customizable.  It has a ton of hit points, hits like a truck, and holds aggro well enough for you to get a lot of backstab damage in while using wolf form.  Its only real weakness is that it doesn't have the best defense, I had to heal mine a lot.  Whether this will become an annoyance at higher levels, or for that matter whether it's something you can fix with gear, I can't say.]