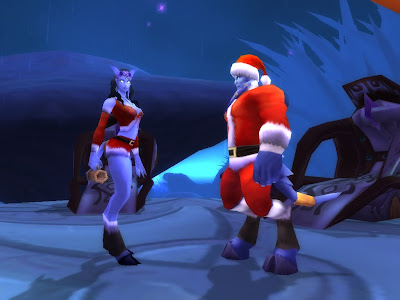 That was the most holiday themed screenshot I had on hand. They look embarrassed and guilty to me, I will not speculate as to what they were doing before I came upon them. In any case, regardless of what you celebrate or don't, I hope the days winding down the year are good ones for you!
Posted by Yeebo at 10:05 PM 2 comments: 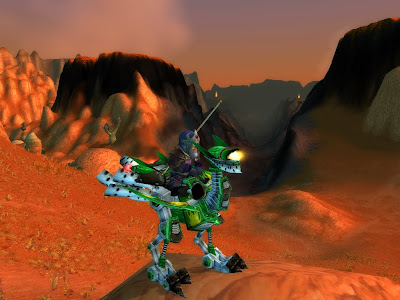 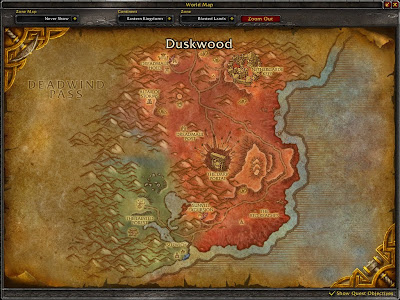 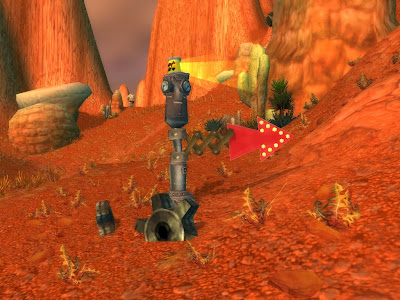 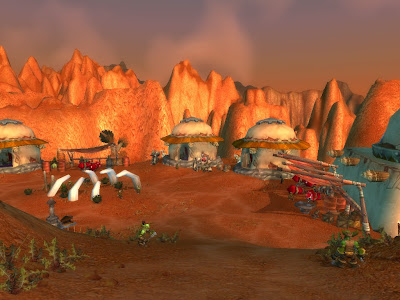 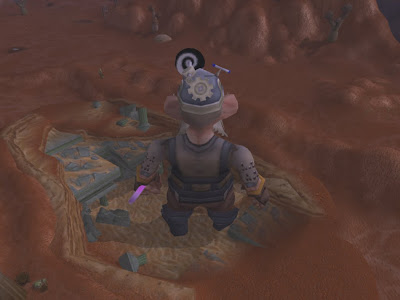 I've since moved on to the Burning Steppes. The progression there is certainly a lot smoother than it used to be. However, so far nothing has excited me enough to want to blog about it.
Posted by Yeebo at 12:06 PM 6 comments:

Recently Bioware has started letting journalists play through one of the Jedi Starter areas in Star Wars the Old Rebublic, and previews of it have been mixed. Mike Nelson over at 1up posted a surprisingly negative preview of it, upset that it contained fairly typical MMO style killing and gathering quests. That's a bit of an odd complaint to me, because I remember the KotOR games having a fair number of killing and gathering quests as well. Conversely, Brianna Royce over at Massively played through some of the exact same content and is positively gushing about it, claiming that the cinematic presentation and well acted voice-work elevate even the most mundane quests.

It seems from reading both back-to-back that Massively got to see a lot more of the game than 1up, and that some of the later quests are more interesting than the first few tutorial quests; which may explain the discrepancy in their impressions. It will be interesting to see what consensus emerges as more journalists get to play through the content Bioware is showing off. I look forward to the game regardless. I'm not allergic to typical MMO quests (could you be allergic to them and play anything but EVE and Darkfall?), and the dialogue options sound really well done.
Posted by Yeebo at 1:08 PM 3 comments:

Great deal on STO, an even better one on PoTBS

I posted somewhere recently that I was waiting for the price of Star Trek Online to get down to "practically free" before I was going to get it. Amazon is currently selling the collectors edition for nine dollars. With shipping it was 11, less than the price of the month of sub time I'll get with the box. I think that qualifies as practically free.

In other news, somehow I missed the fact that Pirates of the Burning Sea FtP has officially launched. You can look at the price matrix here. I have no idea what most of that stuff is, but apart from "ship storage slots" it looks like you get enough of them on a free account to see if they are any good and if you want to buy more. The sweet spot looks like "Premium Account" to me. All you have to do is sub for a month, getting full access to the missions and an XP bonus for Captain's Account for that month. Then, at the end of the month if you cancel you drop down to Premium, keeping all the extra slots and ship insurance. At least on paper, it seems like a good deal.

Finally, my gnome mage made 36 last night. My epic rocket chicken is only four levels away...
Posted by Yeebo at 12:01 PM 5 comments:

Unlike many players, I do not intend to get Cataclysm for World of Warcraft until some time this weekend. I'm currently leveling a gnome mage, so it's unlikely that any of the new content would affect me much. Listed below are what I've been up and my near term plans in WoW, in no particular order.

I have a shiny new gnome mage that I started a little over a week ago up to 32. I was really impressed by the new gnome starter area. I also like the fact that zones and quests lead right into each other. Previously you would run out of quests somewhere in the Wetlands and be forced to go to the area of Stormwind to continue leveling. So far I'm about halfway through the the Hinterlands and have never come close to running out of content. To me completely separate leveling tracks is a good thing, because it means replayability. I still have the entire Westfall -> Redrock -> ect. quest chain series in front of me untouched whenever I decide to roll my next alt. 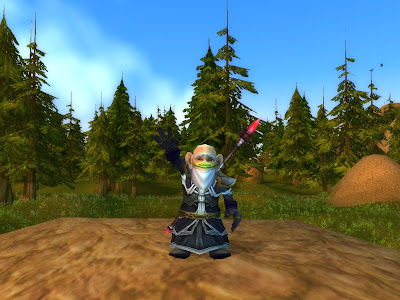 I also leveled a tailor to 20 to support my mage. She will now be able to make gear that is relevant for him into the low 40s at least, and has sent around silk bags to all of my characters that needed them. I could make some very nice blue boots, save that spider's silk is going for berserk prices on the auction house. I refuse to spend 40+ gold to make one pair of boots for a level 30ish character. 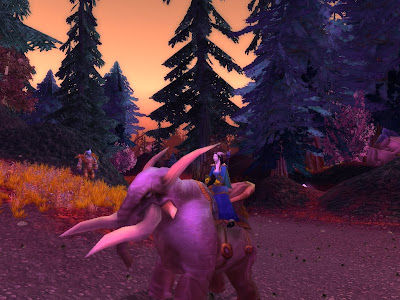 Said tailor is also my first Drainei to hit 20. While the zones are very pretty, and the capstone quest in the 10-20 area feels utterly epic, I can't say I enjoyed leveling through there nearly as much as the dwarf/ gnome areas. There is too much running back and forth to the same spots from a central hub, and the whole "kindly space demons stranded in Azeroth" storyline has never really clicked with me.

The Drainei zones are quite pretty. 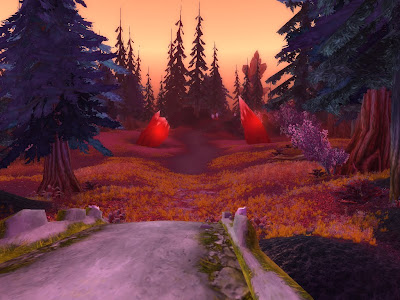 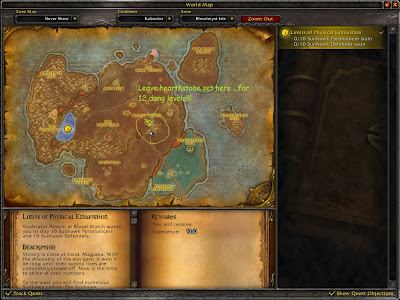 Said Drainei is also my first priest to hit 20. The fact that I was able to immediately see a DPS boost from going Shadow spec at ten really helped me out a lot. Before my priests always stalled out in the low teens when I got tired of wanding things to death (easily the best low level DPS for the old priest). The class is still a bit painful to solo with (at least compared to my mage, which can take down most foes in the time it takes to cast Pryoblast and Fireball), but much improved from what I remember.

I also decided to bite the bullet and join a PuG flagged as a healer. It was actually a heck of a lot of fun, everyone was really nice. I was able to keep everyone maxed out for most of the instance, even the mage who had a tendency to over-pull. I did however cause a wipe by not paying enough attention to my health bar. Surprisingly no-one gave me any grief about it. The reaction was "No worries" and on we went.

Future plans include getting my mage up to 40 so he can buy his rocket chicken, and maybe doing a few instances to improve his gear. Green gear from quests is starting to catch up to my blue gear, a sure sign I need to hit the dungeon finder. 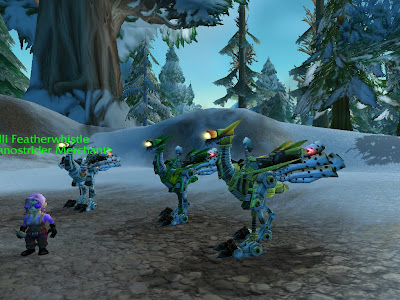 Rocket chicken, how I covet thee!
I'll also be installing Cataclysm some time in the next week. I'm debating whether to start a Goblin, start a Worgen, or simply to keep leveling my Gnome. I'm curious to see whether BC content is more fun now that you can get a flying mount at 60, which of course has nothing to do with Cataclysm. The main content I'm looking forward to in Cataclysm is actually the new Archaeology system.
Posted by Yeebo at 3:40 PM 2 comments:

When I was finally able to get back in to my WoW account, I discovered to my amazement that none of my gear or gold was missing. Apparently, someone hacked my account so that they could use it to send spam tells on a random server. The only change to the account was a new level one character with a name like "Dskjsdka" on a server I don't play on (quickly deleted). Many password changes later (g-mail, banking, ect.), everything seems fine. I haven't had any trouble with the account for the past two days, keeping my fingers crossed. In any case, I broke down and ordered a dongle yesterday.
Posted by Yeebo at 12:48 PM 4 comments: