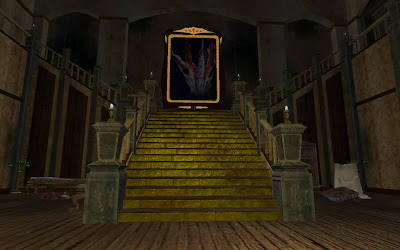 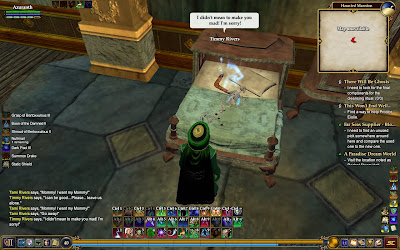 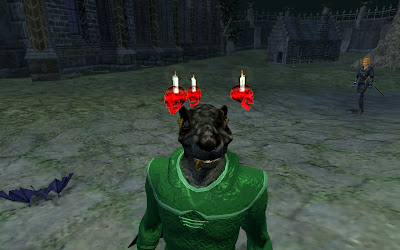 Halloween is one of my favorite holidays (it's the only one I actually decorate my apartment for), and by far my favorite holiday in MMOs. I'm headed out of town for work reasons most of next week, it's going to be a struggle (but a fun one!) to get through all this content while it's live in the next few days.
Posted by Yeebo at 12:53 PM 4 comments:

Amazingly enough, Tobold and Syncaine agreed on something last week, that Star Wars: the Old Republic is doomed to financial failure. I suspect this was because it's too much like WoW (classes, quests, levels, PvE focused) for Syncaine and it's not enough like WoW for Tobold (who argues that no-one plays MMOs for the narratives). However, Ardwulf also weighed in, and running some off-the-cuff numbers also concluded that the situation for SWTOR looks pretty grim. I think Ardwulf actually raises some good points.

To be sure, at first consideration 100+ million looks like an utterly insane budget for any game, even an MMO. However, budgets for sub-free games are hitting 100 million in some cases, for example Grand Theft Auto IV. Those games make zero from subs going forward (though in some cases they sell optional content packs). Admittedly, all the games listed on that website cater to bigger markets than SWTOR because they are on both consoles and the PC. Further, if Bioware really has spent 300 million, I'd tend to agree with Ardwulf that Bioware and EA are screwed. However, with all those qualifiers, I think a budget of around 100-200 million would not be completely insane.

I think it will come down to how well BIOWARE executes the MMO part of SWTOR, and that's what we know the least about at this point (almost nothing really, I'm not even sure if there will be an auction house as I type this). A lot of commentators seem to assume that we are about to see another "sell a million boxes and then crash to 100K steady subs" fiasco ala Warhammer Online and Age of Conan (the last two really big budget MMOs). However I really doubt that.

Both WAR and AoC seriously fell down on basics at launch (for example, AoC was missing features listed on the retail box!?!), and despite that still managed around 100K steady subs. In contrast to those games (and modern AoC for that matter), I expect SWTOR to have a polished and enjoyable leveling game at launch. I don't think we can really generalize from the launches of WAR and AoC to what will happen with SWTOR.

SWTOR is going to be an important test for "PC alone" as a target for big budget games. Based on the fact that it's the unofficial sequel to the much beloved KoTR and KoTR II games, if Bioware was set to release SWTOR across PCs and consoles I think everyone would be a lot more comfortable with it having a big budget. Just on box sales, which would undoubtedly be in the millions, they could expect to recoup most of their budget. Any subs on top of that would be gravy.

However, by choosing to stick to the PC market...they are likely looking at initial box sales of no more than around 2 million. I do think they can top the 1 million boxes that WAR and AoC did, but not by a ton. Maybe over the first year they will get up to 3 or 4 million if the word of mouth is really good. Regardless, on box sales it seems obvious they are not getting back 100-200 million.

What success or failure will really come down to is how many of their users they retain, and whether the steady population grows or shrinks in the year after launch. At this point, there are too many unknowns to judge what is likely to happen. For example:

- What will be the population momentum of a game that sells 1 million + boxes and is actually polished and playable at launch? WAR and AoC certainly haven't given us a clue.

- How many people will stick around to play an MMO that emphasizes an engaging solo experience over typical MMO mechanics?

- How many fans of the rich narratives of single player RPGs want to play an MMO but find a market that doesn't really cater to them?

- How many Star Wars fans will play an MMO that isn't a sand box? Star Wars galaxies was north of 200K subs until the NGE according to most narratives, and to say it was (and still is) a niche product design would be a huge understatement.

There are a lot of unknowns in play that could shake out either way. In many ways SWTOR is aiming at a market that isn't well served by the current generation of MMOs, and really never has been well served : players that want a moment-to-moment play experience as polished and engaging as a big budget offline RPG in an MMO. Whether this will be enough to make a it a breakout hit is anyone's guess. However, I'm not ready to start composing pithy phrases for SWTOR's tombstone just yet.
Posted by Yeebo at 6:03 PM 6 comments:

Big ass sale for a very short time in LoTRO

Via Biobreak, there is a huge sale LoTRO starting at midnight tonight (runs until the 13th at midnight eastern time). Quest packs for the Lonelands, North Downs, and Evindim will all go on sale for 75% off (!). That is enough content to get you to the low 40s and ready for Foreschel if you really milk it. If you are FtP in LoTRO and don't have those zones yet, you'd do well to take advantage. Doing my part to spread the heads up.
Posted by Yeebo at 6:58 PM 3 comments:

The beggining of the end of sub-based MMOs?

Turbine recently announced at the Game Developers conference that LoTRO has done extremely well since going free to play. The number of users has more than tripled, 20% of all lapsed former subscribers have come back, revenue from the game doubled, and subs have actually increased. Sounds an awful lot like what happened when DDO went FtP.

We don't know how well EQ2X is doing, but SOE has already announced that Pirates of the Burning Sea will be going FtP and has hinted that they are considering switching Vanguard over as well. The real pudding will be the rate at which new content starts showing up in EQ II. If we start getting a lot of new content, I would take that as a sign of an increased revenue stream. If the pace doesn't change from what we have seen in the last few years, it may have been a wash for them.

On the other hand you have the recent announcement that World of Warcraft has surpassed 12 million concurrent subs. With Cataclysm coming down the pipe December 7th, it's almost certain that number will go even higher.

To me this really just formalizes what commentators have been saying for years. There's WoW, and then there's everything else. If I were running or developing a sub based "something else," I would be thinking long and hard about switching to FtP. I think Bioware has a good chance to crack a million subs with their Old Republic MMO, and GW II is also likely going to do extremely well. But for the most part I think you'd be daft to try and compete with Blizzard in the sub based MMO space, unless your game is budgeted out assuming (at most) 100K players when it goes live.

News Asides: Not sure how the heck I missed this, but LEGO Universe launched today for pre-order customers. I will be checking that out the very moment a demo becomes available. Also, IGN has an incredibly detailed write up of FF XIV. Unfortunately, due to a number of issues (e.g., the brutal system requirements and clunky UI) I'll be surprised if FF XIV does well on the PC. Hopefully the PS3 version will be better.
Posted by Yeebo at 11:48 AM 8 comments:

If you blog, watch this video over at Broken Toys, it's great.

A lot of the talk is obviously aimed at an audience that works in game development. I don't work in the industry, nor would I ever want too (I applaud you guys, but consider you slightly insane for putting up with the work hours and lack of security). Regardless, his presentation had some pretty good advice for anyone that blogs. Well worth seven minutes of your time.
Posted by Yeebo at 10:21 AM 2 comments: