The Mystery of a Nameless Prisoner (DDO)

One of the things I really enjoy about MMOs, and games in general, is neat background details you can sometimes find.  Dungeons and Dragons Online has a lot of them, especially in older content.  Here is one of my favorites.

If you are working on the Tangleroot Gorge quest line,  it has a bit of a Groundhog Day feel to it.  You end up going into the same dungeon six or more times, with a slightly different objective on each run.  For example your first time in you are just scouting and killing a few hobgoblins, the second time in you are freeing prisoners.  However, much of the layout, trap and mob placement is identical on each run.

A lot of players find the quest chain annoyingly repetitive.  However, one advantage to the strange setup is that the quests can give you a sense of events progressing over time as you enter and re-enter the dungeon.  One of the designers took advantage of this to add in a neat little side story that unfolds over successive runs, but only if you take time to clear out an optional area on every run.

The second time you enter the dungeon, you are rescuing prisoners.  However there is an optional area where you can fight some scorpions: 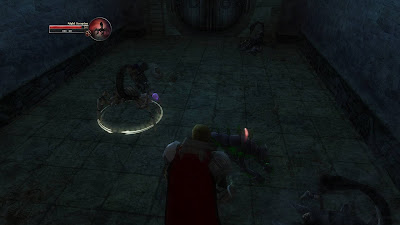 After you kill them, if your strength (or that of one of your hirelings) is high enough you can go through the double doors at the back. There you find this bedraggled NPC: 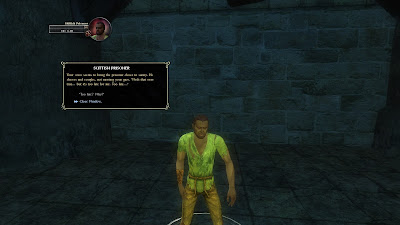 At first he is raving about invisible bugs that are attack him, but when you start speaking to him he calms down.  He relates that he tried to escape, but got stung by the scorpions in the process.  He is now dying from the venom, and it's too late for you to help him.  As he starts to fade, he relates something ominous:

"Hiding down here in the dark, I started listening .  .  . listening to the stones.  It sounds like I'm mad from the venom.  Maybe I am.  But I've heard a voice.  Something lives down here . . . besides the hobgoblins.  Something old and angry.  It lives in a watery cave, and it hates.  Such hate in that voice . . . I am glad I will never meet its owner."

He then drops to the floor, dead. 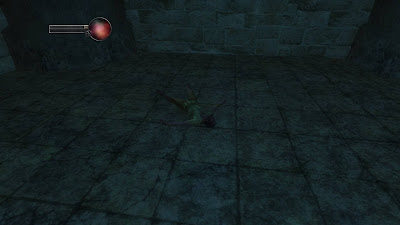 After that there is a treasure chest nearby, and you go on with your adventure.  However if you go to the same optional spot and beat up the scorpions again, you find a single zombie in the area where where you talked to the NPC: 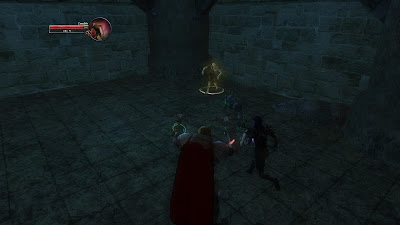 The next time through, if you go to the area for a fourth time, you find a single skeleton: 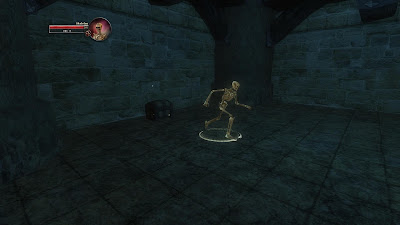 And if you go by one final time, you find only an inanimate skeleton on the floor: 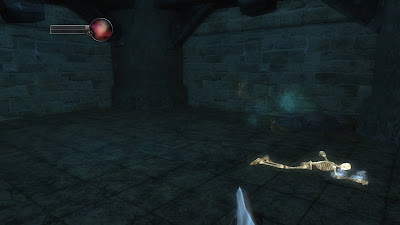 Apparently his body  is now too forgone even for whatever dark magic animated his corpse before to revive him.  At last he is is at peace.
Much later in the quest chain, in yet another optional side area, you can find out what he was talking about.  After killing the boss in the second to last quest of the chain, he drops a key and  this book: 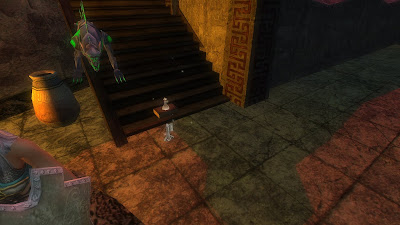 When you pick up the book, the in-game narrator intones: "Zulkash's notes speak about trying to control an elemental in a water filled cavern."
Back near the entrance to the dungeon, if you are the type of player that explores the quest areas really thoroughly,  you may have noticed a grate underwater that you couldn't open . 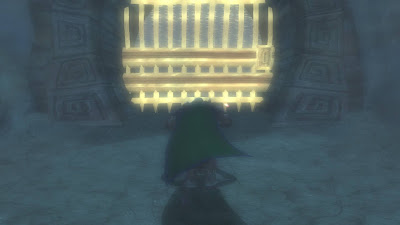 With the key from the boss, you can now open the grate, which leads to a long underwater passage. 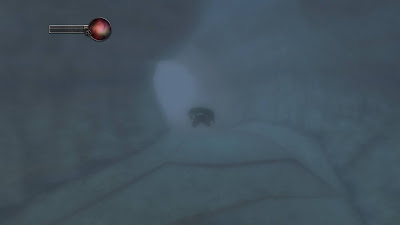 If you have water breathing, a decent swim skill, or are a living golem and don't need to breath like my character, you can swim to the end of the passage.  It opens up into a large cavern, in the back of which is an island with three stone elementals. Zulkash has apparently been trying to take control of them using magic with little success: 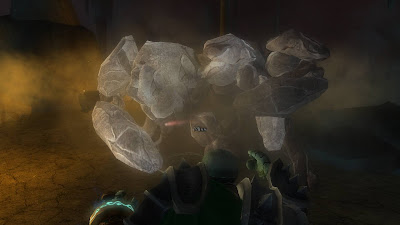 When you kill the elementals you get a bit of XP and an extra treasure chest.  Not hugely rewarding, but it's an interesting side story that you have to put in some work to see.  I love little details like these that game designers sometimes put in for us to find.  You can tell that they are real labors of love.
Posted by Yeebo at 9:51 AM