This week two big pieces of news about Star Wars the Old Republic were released.  Reactions have been mixed, but overall were pretty gloomy in most quarters.  I think SWTOR is one of the most fun MMOs to come along in a while, and I'm still enjoying it quite a bit.  However, I have to admit it's hard to say whether the latest news bodes well or ill for the long term prospects of the game.

What the hell do I make of this?

Yesterday EA released some rather vague subscription information about SWTOR, telling us that it has less than a million subs but substantially more than 500K.  I'm guessing this means the game currently has roughly 700K subs, but whether it's 600K, 700K, or 800K ultimately doesn't matter a whole lot to the arguments you'd make about the numbers.  Glass-half-empty-man would say this means the game has lost 1.4 million players in eight months, the greatest bleedout in MMO history (putting aside the fact that few MMOs have ever had that many players to lose in the first place).  Glass-half-full-man would say that only four sub based MMOs in history have had more than half a million players 8 months out from launch (WoW, Lineage, Lineage II, and  SWTOR being the only ones if I am not mistaken), and that only WoW has managed this feat in the west (putting aside the fact that this represents a drop of close to 70% of the players since the game launched).   Both views of the glass are correct, if uninformative.


I'd argue that what really matters is whether the game is still bleeding out subs, or is hitting it's steady base of core users: 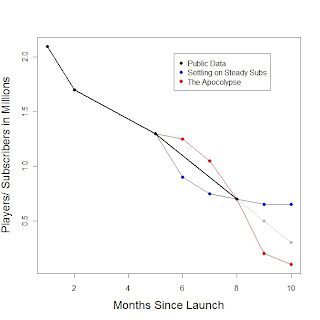 Three scenarios for the future of SWTOR, based on 1.3 millions subs in May and 0.7 million subs in July.  If the decline over this period were the result of a linear trend, SWTOR would be on the gray trajectory.  Blue and red represent (somewhat arbitrary) best case and worst case trajectories.  I chose 100K subs for the bottom of the red line since even abysmal failures like launch AoC* and WAR have tended to level out in that neighborhood.


Since we only have four data points on the number of players in SWTOR it's pretty hard to say whether a leveling out of the current player base or a steady decline to Warhammer Online numbers is more realistic.  My guess, based largely on my limited impression of populations since the server merges, would be that reality is somewhere between the blue line and the gray one, and that the game is likely settling in as the second largest sub based western MMO...at least until it goes FtP in November.  X-fire numbers from July show the number of players as steady or in a very slight decline.  SWTOR is no-where near the WoW challenger EA was hoping for, but it's likely still doing better than Rift, EVE, or even EQ at it's peak.

On the switch to FtP

On the glass-half-empty side of things, at the very least this announcement  means that EA is not happy with the amount of money they are drawing in from subs.  We still don't really know how much EA spent on SWTOR, but clearly the game took/ is taking too long to recoup that cost for even "substantially more than 500K subs" (at least 7.5 million a month in sub fees!) to seem sufficiently profitable to EA.

However, to me personally, this is very much a glass-half-full announcement.  First off, the part of the game that I most like, the 1-50 leveling game and the class stories, is going to be free for everyone.  That means that I probably will eventually get to see all eight class storylines, which I really doubt would have happened if I had to stay subbed long enough to play them all.

More importantly, I just don't like the "Pay $60 for a client and then $15 a month to sub" model.  It's a really poor value compared to most FtP MMOs.  For example, I've already spent more than twice as much on SWTOR as I've ever spent in most FtP MMOs, even ones I've played a lot like Everquest II and Wizard 101.  Even in games like DDO and LoTRO where I pay the big bucks for a new expansion or set of modules every year (I own 100% of the content in both games; adventuring areas, classes, races...everything),  I spend a lot less per year than I would on sub fees.  Plus it isn't as if expansions to sub based MMOs are generally free, in most cases they are on top of your sub fee.

The breadth, depth, and quality of FtP MMO offerings is such that it's getting harder and harder for me to justify the expense of sub based MMOs.**  "Pay only for what you want, and keep access to it forever" in my mind is a much friendlier business model than "You can't even log to check your mail unless you pay us every month."  The switch of SWTOR to FtP is another nail in the coffin of the sub-fee model, and I can't say I'm shedding any tears over it.

*While if flopped hard at launch, current Age of Conan is pretty good (imo) and doing well financially by most accounts.

**I say this, and the three MMOs I'm currently playing the most are DDO, TSW, and SWTOR.  I really thought SWTOR would be my last sub based MMO, but The Secret World impressed the hell out of me in during beta.  Joke's on me?