DDO has been one of my mainstay MMOs for a good long while now.  I'm in a smallish guild there that I quite enjoy, and I log in one or two evenings a week to adventure with a fixed group.  Our characters are now on the cusp of level 15, much further than I've made it before in DDO.  Lately, we have been working our way through the Ruins of Gianthold adventure pack.

Gianthold contains a small village/ quest hub that has a suprisingly full suite of ammenities.  It has auction house access, a bank, and most of the vendors you could want including one that sells hireling contracts.  Obviously, it also has giants: 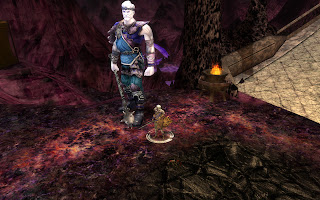 The giants DDO are scaled pretty accurately to what I recall from the pen and paper rules, which is to say massive.  Here is my dark elf favored soul standing next to a cloud giant.

The giants hand out quests primarily to kill giants and their minions.  Stone giants, fire giants, cloud giants, and even skeletal undead giants all make appearances (you spend a lot of time stabbing giants in their calves).  The visual design of the giants I've seen so far hew pretty closely to the way they were envisioned in the original AD&D monster manual.  It's been a treat to see the illustrations I remember from my teenage years come to life. 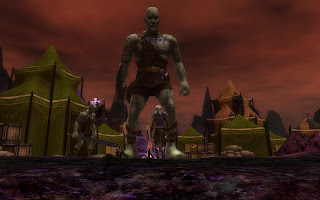 Yeah that's pretty much as bald and scary as I expected stone giants to be based on the PnP illustrations.

The quest rewards haven't really been blowing my mind.  Of course due to time spent farming items with nice set bonuses in a lower level area, as well as the labors of a guild crafter, my character is quite well geared for a level 14.  It's not really surprising the area holds few upgrades for me.  The XP rewards, at least, are very nice.  By the time we leave I expect to be at least close to level 16.  Visually, the area is also really interesting. 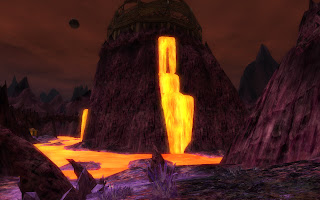 In general, the further along you get in DDO the more interesting the environments get.

For a really old game that runs well on meager PCs, DDO still looks quite good in my opinion.  I also find the real time combat to be a nice change of pace from almost every other MMO I play.  I find the depth of the character generation system in equal parts frustrating and entertaining.  When a build comes together and works for what you designed it to do, it's exhilarating.  When a build fails and you realize you have spent days leveling a gimp, it's not as exhilarating (to put it nicely). 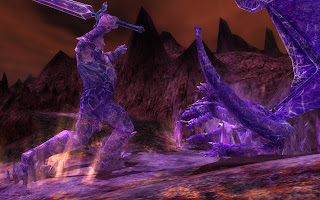 Gianthold was apparently once the site of a war between giants and dragons.  How both sides got crystallized I'm a little fuzzy on, but it makes for some impressive sights.

Apart from DDO I'm still playing SWTOR nearly every night.  Unless I am mistaken, character transfers will go live tomorrow night.  It would certainly be nice to be able to move some of my abandoned characters on other servers to my current home, but I'm not sure they will qualify since they are all on slightly different server types to the one I'm currently playing.  Regardless, I'm still having fun there and plan to see the two Imperial class quest storylines I'm now on through to the end.  From there, the Republic awaits... and of course Secret World and GW 2 at some point as well. My interests over the summer look to greatly outstrip my spare time. 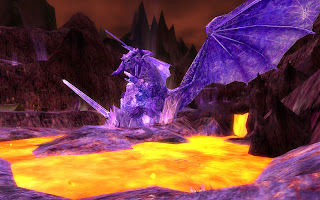 I leave you with another set of crystallized figures, this time on an island surrounded by lava.  This really belongs on a heavy metal album cover.
Posted by Yeebo at 7:22 PM