I absolutely love the ability to slot cosmetic items. Making my toon look the way I want is a game in-of itself as far as I'm concerned. Giving me cosmetic slots to fool with gives me a ton of extra gameplay, and for what would seem relatively few development resources . . .save implementing the system in the first place, of course. As an example, this is what my dwarf champion in LoTRO would look like in his current gear: 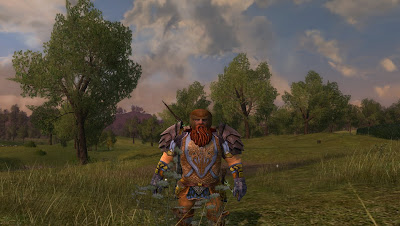 It's fine, there is nothing terribly wrong with it [Edit: on further reflection, this is only a step removed from a blind rodeo clown outfit...what were they thinking?]. However, to me it doesn't look like he is really wearing heavy plate armor. Instead he looks to be wearing some odd combination of plate and leather armor.

This is what I've been using for my appearance slots for the last year, and it looks like more like real armor. However, it still doesn't look quite as sturdy as I'd like. Plus I've simply gotten bored with the look. 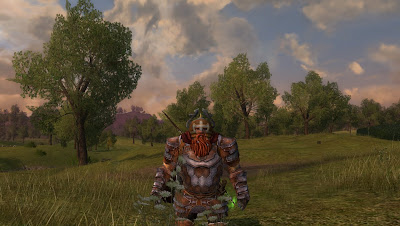 Quite by accident, I discovered that there are NPC vendors in Thorin's Hall that sell gear that really does look like plate armor. Cheap NPC vendor armor, plus gray dye and a nicer helmet, and viola! This is what my guy is using for his appearance slots now, and to me it looks like he could take a tank shell in the chest and still get up: 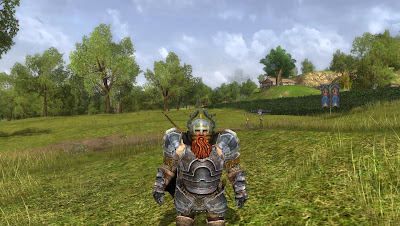 The stats on the armor he is wearing (the top screenshot) are very good for his level. He is currently level 53, and it's impossible to craft him a better set of armor until he hits level 58. In fact it took almost six weeks to craft the set he's wearing using guild recipes. Few, if any, random drops or quest rewards will be an upgrade to him until much higher levels. Were I playing a number of other MMOs, I'd be forced to appear as the top screenshot at least until level 58, or take a severe stat hit. In LoTRO I have the freedom to decide how I'd like to look.

Just getting this set of appearance armor together gave me a good hour or two of (to me) really fun gameplay. It also made some random low level vendor items actually serve a useful gameplay purpose. The stats on the gear in his cosmetic slots are so terrible from a stat perspective that they have no functional reason to exist in the game; as seems to be standard with all vendor gear in MMOs for some reason. However, because of the appearance slot system they provided me with a great customization option.

Appearance customization slots also partially alleviate another issue that a lot of MMOs seem to have. Once the level cap passes a given set of raid content to a certain degree, there is really no reason for that content to exist any more. Players are not going to fool with it once the stats on the gear you can get are horrible compared to normal top level solo quest rewards. For example Molten Core and Blackwing Lair currently have no reason for existing in World of Warcraft. They are old level 60 raid dungeons. As badass as some of the armor you can get there looks, there's no real reason for it to be in game right now (or there wasn't when I last played, there was talk of revamping BWL to drop gear relevant to 85s, they may have implemented that by now for all I know). However, if WoW had appearance slots I can totally see going in to get those armor sets on a small party of bored level 85s.

Cosmetic slots turn obsolete encounters and vendor trash into potentially compelling content, even to bored players twiddling their thumbs at the level cap. I've never been able to understand why they aren't a standard feature of more MMOs.
Posted by Yeebo at 9:00 PM