City of Heroes/ Villains is having a free account reactivation weekend (thanks to Sente for the heads up!). City of Heroes is actually one of my favorite MMOs, I like to spend at least one random month there every year or so. One of the coolest things about it is that you can make almost any character you can dream up. In my hands, that usually means I make either a character based on an old PnP character, or simply the most absurd looking guy I can come up with. In a fit of self indulgence, I'm going to post picks of some of my favorite toons.

First off has to be Bob, AKA Electric Dude: 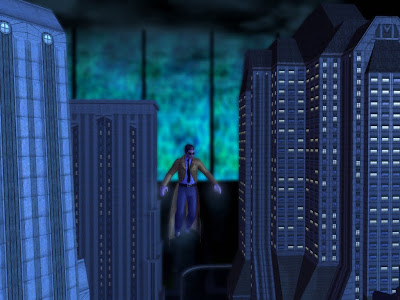 I can levitate using a static charge! And thank goodness, because the ability to teleport is a damn good way to murder yourself in CoH if you can't also float in the air when you arrive.
This guy started as a PnP character that appeared in the Marvel Superheroes RPG and also in GURPS. As soon as I was able to recreate him in an MMO I did, as an electric blaster in CoH. He was the first guy I rolled when CoH went live. I also made a very similar character when Champions Online launched. His major ability in all four incarnations is the ability to control electricity. The guy above can shoot bolts of lightening and paralyze opponents with shocks. He can also teleport over short distances. Visually, the idea is that he looks pretty normal. You'd never guess he has super powers.

Next up is the Blue Zapper: 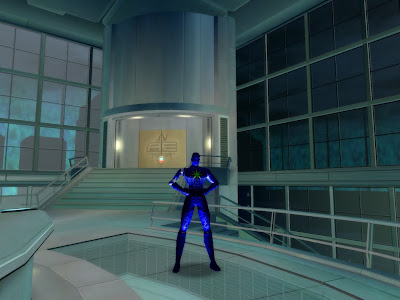 He is a plasma blaster. His appearance came about pretty randomly, I was fiddling around and liked the look of this model. The backstory that his character model suggested to me was that he was an experimental android that got damaged in a lab incident that also led to him becoming self aware. He has never had his arm repaired because it reminds him of where he came from. The name, Blue Zapper, he likely picked because he was too inexperienced with humans to realize how cheesy it was. 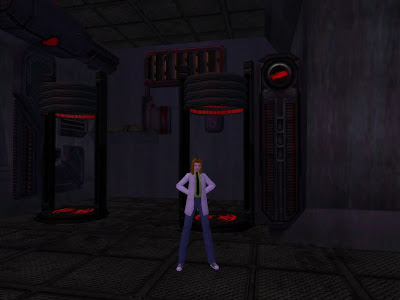 She was inspired by a roommate I lived with a few years ago. My roommate was extremely skilled at the lab techniques of molecular systematics (thus the lab coat), and also obsessed with houseplants. Crazy Plant Lady is a plant dominator, with all sorts of plant based abilities like shooting poisoned thorns and rooting groups of mobs.

My highest level character so far is Frito, this is a typical sighting of him: 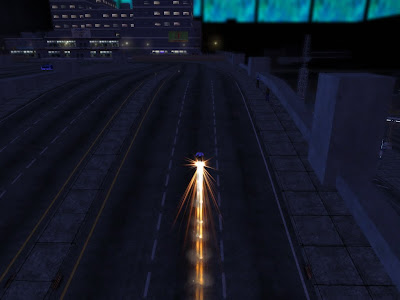 I run super fast!
When he stops long enough for anyone to get a glimpse of him, it turns out that he is a four foot high goth clown, that works out a hell of a lot: 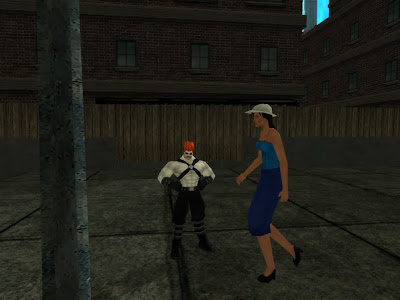 He is a defender (typically a healer, in this case a buffer) that can cast force fields; powerful defensive buffs that look like soap bubbles when you apply them. The cool thing about being a "bubbler" is that once you get the entire party buffed up you have ten or fifteen minutes to join in spamming down foes with damage before you need to renew your buffs. No babysitting health bars required, and yet any team is still delighted to have you. Definitely an eating your cake and yet possessing it character design. The look was chosen simply to be as gonzo as possible, as with the next two.

The character I have played the most on the villain side is Death Lagomorph (a reference to the mammalian order to which rabbits belong): 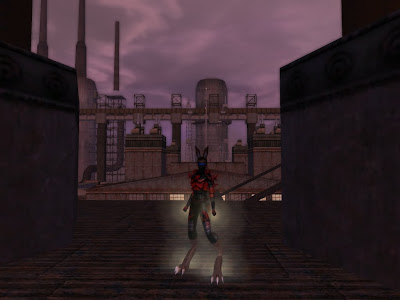 Reminds me a bit of Donnie Darko.
Travel ability super jumping of course :-) She also has all sorts of "darkness" abilities like shooting black bolts at her foes and summoning black tentacles that root crowds of mobs and do damage to them. The final guy I want to show off I rolled this morning to try out the new starting area that was added to CoH in the last expansion: Praetoria. His name is is Corwin: 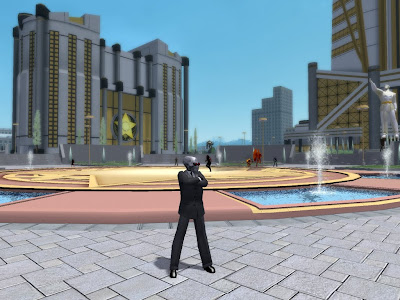 I figure if you are going to be a goggle eyed skull headed monstrosity, you may as well at least have a snazzy suit.
Posted by Yeebo at 8:14 AM