Earlier this week the blogosphere was alight with displeasure at how badly Trion managed phase 3 of their world event over the weekend. Even generally upbeat bloggers like Blue Kae and MMOGamerchick expressed disappointment. I was on during the weekend, but didn't bother trying to log during the event itself due to pretty horrific que times. When I saw I had an hour long wait to log on, I fired up LoTRO instead.

Even if I had been able to get on, I doubt I would have been able to participate in the finale because my highest level character was only level 18 or so at the time. So the whole fiasco didn't really affect me at all. However, as an apology Trion handed out free stuff to everyone with an active subscription. Given my penchant for alts, this actually had a big effect on me since each of my toons got a random free item.

Most of my characters got 20 slot bags. That's a pretty ginormous bag to a low level character. My main is a tailor making bags out of cloth higher level than I'm getting from drops, and she can only make ten slot bags so far. However, the best was in store for said main: she got a 90% runspeed horse when she opened her gift box. Normally you have to get to level 40 to be able to ride such a fast mount, and they cost something like 35 platinum (my character currently has exactly 3 platinum to her name). As a bonus, it looks way cooler than the turtle I've been using: 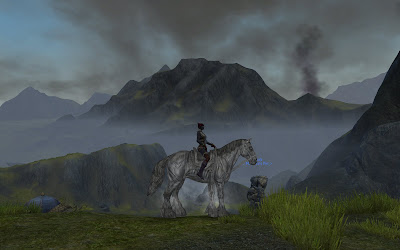 Even on my mediocre PC, Rift is a very pretty game.
Trion may have ticked off the bulk of their player base over the weekend, starting a wildfire of negativity that burned across the web, but they sure threw me one hell of a bone. All because I "missed" an event I had no intention of participating in. Doesn't seem quite fair, but I'll certainly take it :-)
Posted by Yeebo at 12:22 PM