After some internal debating, I decided to sub up to WoW for a month and see what the post shattering game is like. STO certainly has me intrigued, and I plan to buy the full game soon. However, the only way for me to try out the "new improved" WoW was to sub up.

I started a gnome mage named Grizlith. My first ever MMO character was a wizard in Everquest named Grizlith (a name I made up). Since then, I've recreated Grizlith in a variety of games. He was actually my first main in WoW. I got him up to the ripe old age of 62, and then decided I wanted a redo and deleted him. Soon after that I switched to horde on a different server, got a warlock up to 70 Burning Crusade era, and kind of forgot about him.

With the cataclysm revamp of WoW, I had a good excuse to re-roll him on my old alliance server. Poking around, it turned out I had all the alts needed to twink him to the gills. This chick is a maxed out tailor for her level: 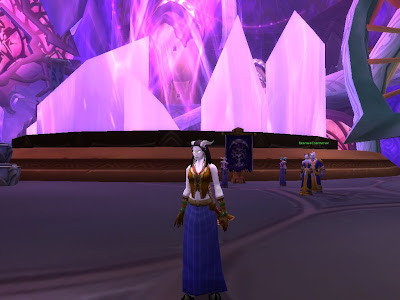 And this guy is a maxed out leather worker for his level: 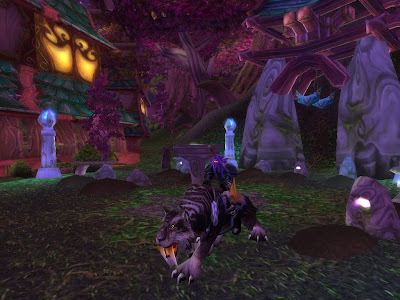 Because of armor kits, I was able to get Grizlith into cloth armor that has almost as much AC as plate mail would at his level. [As an aside, I defy anyone to get together a cooler looking set of level 20 leather than what Yarik (above) is wearing.] Grizlith also got lucky with drops, he ended up with a beer mug that went perfectly (low level stats wise) with a dagger that he got from a quest: 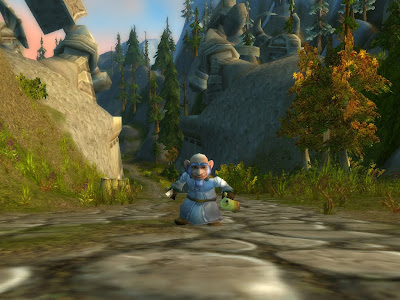 As to revamped WoW itself, all I can say is that I am stunned so far. The leveling game that I have seen up to 12 is substantially streamlined and improved compared to what I last played. I don't think I exaggerate when I say that Blizzard has achieved a level of polish that will be next to impossible for competing MMO developers to emulate. Almost every single quest in the old WoW has been replaced with something better. So far the storylines are more engaging and clearer than anything I remember.

The mechanics of quests have also been improved. Where before you would hit a hub with ten random quests, you now hit a hub with fewer quests but each quest directly contributes to the storyline you are playing through. Kill and gathering quests remain, but there are also now a large number of quests where you are doing interesting stuff like flying around in a plane and bombing foes or leading a robot around to clean up toxic sludge (two random examples).

Finally, class designs have been given a huge overhaul. I haven't messed around with all the classes, but the ones I have tried had (mostly) pleasant surprises. Like Anjin, I was really pleased with the redesign of Mages. Many spells have been updated or improved. For example, Arcane Missiles now can't be used unless it procs off of another offensive spell. Each spell you cast has a 40% chance to activate it. When it does become active, it cannot be interrupted...so you can use it in melee range. On even cons it's good for roughly half a health bar. In old WoW I barely used arcane missiles on my mages. Unless facing a foe resistant to frost and fire it rarely was worth casting. Now, it's one of my favorite spells.

I am not by any means claiming that "the new WoW" is a perfect MMO. It's still a shallow linear MMO lacking certain basics like housing and appearance slots. However, within the limited scope Blizzard has chosen to focus their game, post Cataclysm WoW sets a bar that I doubt any directly competing MMOs are going to be able to reach. This is some of the smoothest and most entertaining questing I've ever experienced. A five year old MMO that I was so burned out on I thought I'd never be able to play it again now seems fresh, engaging, and relevant to the modern market.
Posted by Yeebo at 5:13 AM