My main character has hit the ripe old age of level 11. I've ended up playing the Empire side, mainly because I like the art direction. It has a very cool eastern European/ steampunk/ I'm-not sure-what feel to it. For example, one of my quest givers: 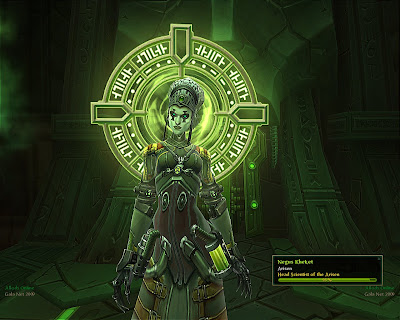 My character at level 8, with her steam powered robo-scorpion in the background: 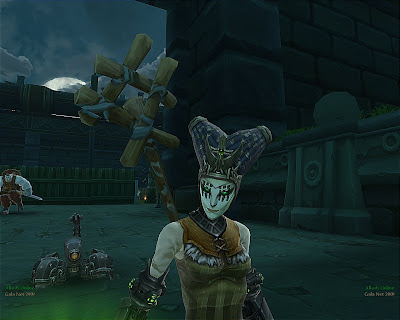 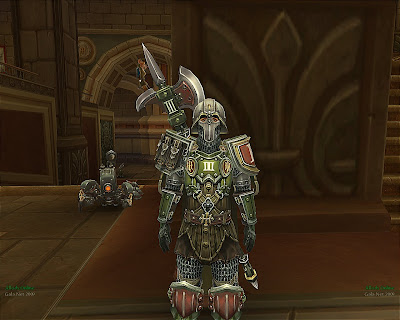 And the ceiling of the building that he works in: 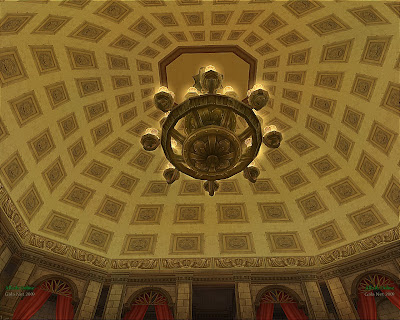 In contrast, most of the art direction I saw on the League side really looked like the devs "phoned it in."

Once you get up to level ten or so, most of your quests will send you to an instance called Xeos. There are so many people playing right now that, even as a rare as dirt ranged DPS, it's a matter of minutes to get into a party running it. Which is a good thing, because it took me three runs to get all my quests done.

My second run through I won a roll on an absolutely badass blue robe (11 perception!). The model for the robe turned out to be somewhat revealing. I'm sure it's intended to be sexy, but the effect on my Renaissance Borg is simply disturbing. It's like a zombie grandmother in a slinky negligee. Well, ok not that disturbing: 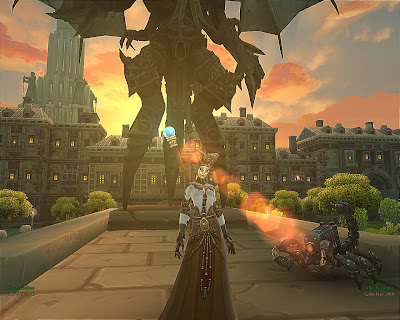 Juggling stats in Allod's is more challenging then I expected. You need to get five different stats as high as you can. There are three in particular, Intelligence, Perception, and Luck, that will gimp a caster hard if you let them get too low. I have this odd feeling that I'm constantly putting out fires when I play.

Finally, the community is better than I anticipated, at least so far. The three PuGs I've been in all went well, and folks actually talk in them (shocking!). Each one involved at least one wipe, but there was no rage quitting or whining about it. Zone chat does have occasional flareups of asshattery. However, it's still nowhere near as bad as the global chat channels in WoW, or any random X-box live match for that matter. Mainly it's folks getting groups together and asking for/ offering advice.
Posted by Yeebo at 9:22 AM