Vangaurd: Today it was announced that Vanguard is going to go FtP. It's a MMO that I've always wanted to try, but never got around to mainly because of reports that the servers are dead as a doornail. This will certainly be enough to get me to at least try the game out. Hopefully all the MMO enthusiasts that have been aching for a more open world experience than most MMOs offer, and that has decent populations, will have less to complain about soon.

Dungeons and Dragons Online: In my last post, I forgot to mention the DDO expansion that's coming some time this summer. The expansion will link the game directly into the Forgotten Realms, a setting that I suspect is a lot more familiar to most D&D enthusiasts than Eberron. It will also offer Druids as a playable class, complete with the ability to shapeshift into various animals and summon an animal companion. The latter is reportedly a powerful pet that levels with you, on par with the mechanical pets that Artificers can summon. If the Druid ends up being as capable as the Artificer and the Monk (and there is no reason to expect otherwise), it should be an extremely fun class to play.

Monster Play in LoTRO: earlier tonight I decided to try out the new and improved Weaver in LoTRO. The moors were absolutely hopping, with at least a full creep raid and a full freep raid fighting back and forth across the map. There were so many players, in fact, that when I stumbled on a major engagement I promptly lagged out and died. Still, I'm glad to see activity picking up again. My experience as a creep newbie was much improved over previous times I've rolled one. The beginning tutorial now leads you painlessly through all of the basics you need, and hands you a ton of daily quests to get you headed out and about the moors.

Weavers do seem much improved from the last time I tried one. They now start with a nice assortment of ranged DPS and snare abilities, as well as a pet with decent hit points. If you really want to tick someone off, you can disappear underground and become invulnerable for 30 seconds or so...leaving your pet (that's worth zero points as a PvP kill) above ground to fight in your stead. I leave you with a picture of my newbie weaver: 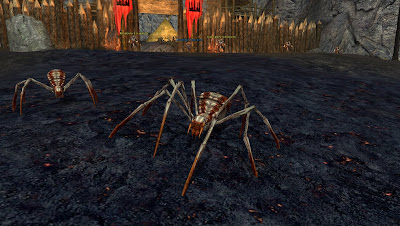 Talanriel and her hatchling. According to the weaver character creation screen, giant evil spiders in middle earth often have elven sounding names and are generally female. I suppose a male weaver couldn't really be expected to lay a hatchling egg . . .
Posted by Yeebo at 7:22 PM