Where did September go?

The greater part of September seems to have vanished. This has been one of those weeks where I got a lot done and still don't feel like I'm on top of everything. A lot of neat little news tidbits have caught my eye, but I haven't taken time out to comment on them. So now I ramble...

SWG: Star Wars Galaxies just launched atmospheric flight. You can now summon your space-ship and fly it around on planets. If you fly straight up you even zone into space once you get 6 kilometers up. They launched it just in time for me on the heritage quest chain, since I am now frequently being sent to targets in excess of 10km away. Not too bad now that I can fly there in my space-ship. It must have been a real up bitch up until last week. 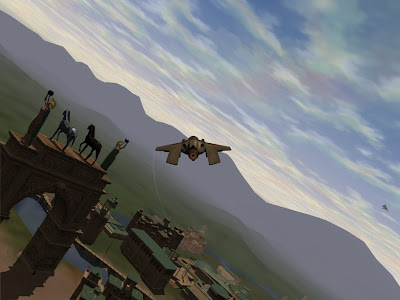 This is the ship you get for free by doing an optional side quest in the tutorial area. I have no idea how you get a ship "the normal way."
DCUO goes FtP: DC Universe Online is going to go free to play. It seems a bit odd to have three different Super Hero themed MMO options available for FtP. In fact, as far as premium FtP MMOs go, capes and tights is now seemingly the most crowded market apart from fantasy. DCUO is unlikely to compete very strongly with Champions Online or City of Heroes/ Villains, since the bulk of its current audience is on the PS3. If it were PC only, I doubt DCUO really could compete with CO or COH given how much deeper the latter games are.

That said, as a full featured FtP console MMO I can see where DCUO might carve out a niche. Even if you are willing to sub, the other two MMO options on consoles are pretty abysmal by modern standards. Both are grindy and practically require you to group to make progress on most classes. On top of that FFXI, the most sucessful console MMO to date, has systems that are obtuse even by old school MMO standards deeply embedded. Console gamers are still an untapped MMO market.

LoTRO: The Rise of Isenguard launches on Tuesday. That's four days! A great dev diary/ preview of Orthank went up on the web a few days ago. It looks really cool to me. Those are narratives I want to experience. Between Isenguard, dabbling in SWG until it shutters, and hanging out with my DDO guild a couple of nights a week it looks like my spare time is accounted for until around the launch of SW:TOR.

KoTOR II vs SWTOR: Speaking of SW:TOR, playing SWG awakened an urge in me to play a Star Wars RPG with a UI that doesn't fight your every desire tooth and nail... and that has a storyline I'd ever give a crap about. I never quite finished Star Wars: Knights of the Old Republic II and so I spent an afternoon with it last weekend. The graphics are really dated. However, the storyline is really engaging. Soon I found myself not caring about the sparse environments and clunky animation, I just wanted to know what happens next. That's a feature lacking from most MMO narratives, and something I hope that SW:ToR will finally remedy.
Posted by Yeebo at 1:16 PM