DDO: The rest of update 5

Lest this blog become known as Yeebo's random DDO rants, I feel obligated to give some more details about book five now that I've had time to mess with it.

The guild leveling system I like quite a bit. Whenever you finish a quest chain, in addition to the normal rewards you are offered an item that will feed points to your guild. Even soloing low level quests I've managed to add a few thousand points to the guild I joined on Khyber to check the system out. The guild I'm in now is closing quickly on guild airship territory, I look forward to messing around with that system. A rumor I have heard is that the airship system strongly encourages you to buy items from the DDO item shop to fit out your ship. Not being in a guild that has unlocked one, I can neither confirm nor deny that. But I hope the worst versions of the rumor I've heard are exaggerations.

The new content pack is also absolutely brilliant. It's a bit puzzling that it's aimed at level five-ish characters, since we already have so much content in that level range. However, even doing normal mode on a level eight character I got a ton of XP from the first two adventures. I also found the story lines and quest mechanics to be really engaging. SPOILER ... For example, at one point in the second chain a bunch of barrels and boxes fly up into the air and assemble into a sort of trash monster...very surprising and very cool...END SPOILER. I'm really looking forward to the next quests in the pack, the first two were some of the best content I've seen in DDO. The only issue I ran into was that I had a bit of trouble figuring out who to talk to first to start things up. It turns out the first NPC is all the way in the back of the House P compound. Do not get distracted by the chick balancing on the head of a wolf near the entrance: 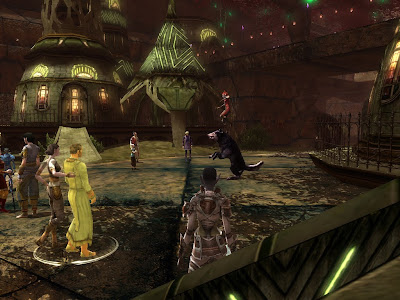 I also got stuck on one part where I was convinced that a Mario Brothers style approach to something would work. Many falls later I realized I was mistaken (at least at my jump level). However I didn't mind at all. The simple puzzle solving is one of the things I actually really enjoy about DDO.
Posted by Yeebo at 5:24 PM